The blog of the Donna Reed Foundation for the Performing Arts has moved to a new location. You will now find us on the Foundation’s site at donnareed.org.

This site will no longer be updated but will remain as an archive of our past posts. 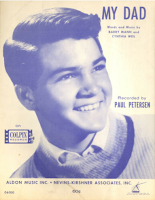 Paul Petersen is best remembered as Jeff Stone, the son on The Donna Reed Show. It was on The Donna Reed Show in 1962 when Petersen sang “My Dad” to his on-screen father, Alex Stone, played by Carl Betz. “My Dad” was released later in 1962 on the Colpix label, reaching #6 on the Billboard Hot 100. Petersen penned the following reflection for Father’s Day.

Among those things of which I am most proud is the single episode of The Donna Reed Show called “My Dad.” It is tops among my performance life in television. This single episode is consistently voted in the Top 100 single episodes in television history. That’s why it’s in The Television Hall of Fame. It struck a chord in America when it was first broadcast on October 25th, 1962 and you’d have to be made of stone not to be touched by its straight-forward unapologetic sincerity to this very day.

"My Dad" was not a spontaneous act of creation captured on film. The song was written by Barry Mann and Cynthia Weil, arranged by Stu Phillips, recorded and re-recorded for its presentation on a carefully written family show. It was seamlessly lip-synced for a variety of camera angles over a two-hour period with an hour out for lunch. Scores of people behind the lens made it happen, and they all knew what they were doing, from Donna Reed and Shelley Fabares to the property master and cinematographer.

Spencer Tracy had a viewpoint he shared with Sidney Poitier that says it all when it comes to acting. “Don’t let anybody catch you at it.”

"My Dad" was then and is now greater than the sum of its parts. This Father’s Day classic continues to capture people’s hearts and moves them to share its impact. I hope the lyrics reach deep into your soul. Take the time to watch the “My Dad” episode on YouTube. Write to me. I collect these tales. Happy Father’s Day.” -Paul Petersen

View the video
Posted by JP at 4:58 PM No comments:

The Donna Reed Foundation has made the very difficult decision to cancel this summer’s Children’s Musical Theatre workshop. “During this time of uncertainty, the health and safety of our students, their families, our volunteer staff, and audience members is our top concern,” said Pat Fleshner of the Donna Reed Foundation. “We are disappointed we will not be bringing a popular theatre experience to the community this summer but we are looking forward to offering an exciting adventure next year.”

This summer will be the first that The Donna Reed Foundation hasn’t staged a Children’s Musical Theatre workshop and production since the program was established in 2007. This year’s workshop production, Disney’s The Aristocats KIDS, will be held over for next year’s program.
Posted by JP at 12:26 PM No comments:

We have a new look. 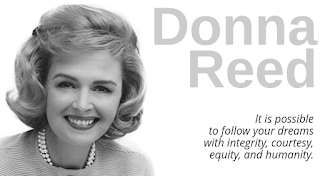 to announce that The Donna Reed Foundation's new and refreshed website is live. The update provides a stronger sense of who we are, what we do, and why we do it.

It also features a modern design, improved functionality, and easy access to essential information. Visit our Website here.
Posted by JP at 3:24 PM No comments:

NBC's Jesus Christ Superstar Live in Concert, which aired live from Brooklyn on April 1, 2018, will be rebroadcast on the network Easter Sunday, April 12 at 7 p.m. EDT/6 p.m. CDT.

The cast includes Brandon Victor Dixon singing the role of Judas. Dixon was a 1999 Donna Reed scholarship finalist in musical theatre. He is known for taking over the role of Aaron Burr in the hit musical Hamilton from original star Leslie Odom Jr. Dixon played Burr for nearly a year at the Richard Rodgers Theatre.

As a producer, Dixon's revival of Hedwig and the Angry Inch won the 2014 Tony Award and the Drama Desk Award for best revival of a musical.

The Donna Reed Heritage Museum remains closed through Thursday, April 30 to help contain the spread of COVID-19. Like you, we are concerned about the health and safety of everyone during the coronavirus (COVID-19) outbreak. We will continue to monitor and follow the advice of the Iowa Department of Public Health and the Centers for Disease Control regarding a date to reopen.

Take care of yourselves, your communities and your information intake—make sure you’re following verified sources to help separate findings from feelings.

The Big Show Show is all about the heavyweight WWE star Paul Wight aka Big Show. The story revolves around the WWE star and his teenage daughter who comes home to live with him, along with his wife and other two daughters. Giroux is cast as Coach Fener.


Giroux, from Phoenix, AZ, was a 2003 Donna Reed Scholarship recipient in Acting. On camera, he recurs as The Toddler on Nickelodeon’s “Henry Danger”, Superintendent Bonavich on Disney’s “Coop & Cami Ask The World”, Little Zach on the CW’s “Hart of Dixie”, and the Dark Warrior on Disney’s “Mighty Med”.
Read his bio.
Posted by JP at 2:13 PM No comments: