Ben Rappaport (Mr. Robot) has been cast in a recurring role opposite Molly Bernard on Season 3 of Darren Star’s TV Land comedy series Younger.
He’ll play medical intern Max Horowitz, a new love interest for Lauren Heller (Molly Bernard). Max and Lauren went to camp together as kids, and when they run into each other in a bar, they start to rekindle their friendship and develop into something more. Ben will first appear in the third episode of the season, “Last Days of Books”, which airs Wednesday, October 12. Season 3 premieres on September 28.
Rappaport can currently be seen in the second season of USA’s breakout series Mr. Robot recurring as Ollie Parker. He previously recurred for two seasons on The Good Wife and starred in the NBC comedy Outsourced. He is co-starring on Broadway inFiddler on the Roof and will soon appear in Landing Up, a film he also co-produced.
Posted by JP at 10:07 AM No comments:

If you are a “Minecraft: Story Mode” gamer, watch for Mevia, the enforcer. You will be hearing the voice of Kari Wahlgren, a 1995 Donna Reed Foundation National Scholar (acting/vocal) from Hoisington, KS.

“Journey's End” is the eighth “Story Mode” episode, and the final announced episode thus far. It follows 'Access Denied' (review here), but this time out, Jesse and party seem to be on the cusp of finding their way home.


In Episode 8: 'A Journey's End', with Harper leading them to the world of the Old Builders, Jesse and crew finally have their chance to return home... but it won't be easy, and the stakes are high. You'll need to take on opponents in a series of gladiatorial games to win your freedom, save your friends, and maybe, just maybe, make it back to your own world! 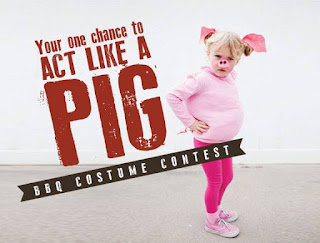 
Look ridiculous and win prizes at the 2nd ever BBQ Costume Contest! Get creative and dress up as your favorite meat, animal or anything else BBQ related and you could win! All ages!
PRIZES: 1st- $100 in BBQ Bucks; 2nd- $50 in BBQ Bucks; 3rd- $25 in BBQ Bucks; ALL runners up - $5 in BBQ Bucks
The silliness goes down Sat., Sept. 17th at the Reisz Construction FREE streetside stage at 3:15pm, hosted by the Donna Reed Foundation for the Performing Arts.
Check out the full event schedule at: tricitybbq.com/schedule
Posted by JP at 8:14 AM No comments: