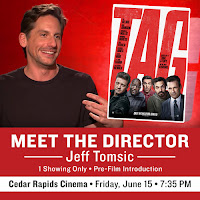 
Jeff Tomsic was born in Chicago but raised in Cedar Rapids. He was back in town for the debut of his first major motion picture-- one he just happened to direct.

The Washington High School graduate is behind the new movie "Tag." Tomsic made it into the big dance at Sundance with a short film in 2011. This month, he waltzed into the big leagues.

“Tag,” his feature film directing debut, opened third at the box office, raking in $14.6 million — more than half of its $28 million price tag — in its first weekend.

The comedy is based on a true story about a group of friends who've stayed together into adulthood by playing tag every year.

Read the Cedar Rapids Gazette story
Posted by JP at 2:34 PM No comments:

The curtain closed on another successful musical theatre workshop for kids on Saturday, June 16 with a performance of Disney’s The Jungle Book, KIDS. Director Laurel Olsen, along with a volunteer production crew of 15, worked with students in kindergarten through eighth grade. In six days they were able to learn dialogue, musical numbers, and choreography, as well as experiencing how a musical production is put together.

This was the 14th year for this popular workshop sponsored by The Donna Reed Foundation.

Read Dan Mundt’s article in the Dension Review.
Posted by JP at 11:36 AM No comments: