Kari has a very impressive and ever-growing voice-acting resume, which includes voicing characters in a raft of popular animated Nickelodeon series, including "Kung Fu Panda: Legends of Awesomeness", "Teenage Mutant Ninja Turtles", "Harvey Beaks", "Breadwinners", "Winx Club", "Monsters vs. Aliens", "The Penguins of Madagascar", "Back at the Barnyard" and "Tak & the Power of Juju".

Adam Daveline will lead the cast as Scrooge in a new adaptation of Charles Dickens' A Christmas Carol, with performances beginning on Wednesday, December 16th at The Clurman Theatre at Theatre Row on West 42nd Street in New York City. This limited holiday engagement runs through Wednesday, December 23, 2015.

Seven performers bring 57 classic characters to life (or death) in this imaginative production. With clever action and creative staging, this ghostly retelling delivers a fresh look at this beloved traditional tale.

Daveline, a native of Jacksonville, FL, holds an MFA in Acting from the University of San Diego/Old Globe and a BFA in Musical Theater from Brigham Young University. He is an actor, writer, and director who has created productions both on film and on stage. Some notable credits include: Into the Woods (Roundabout/Fiasco), Unlock'd (Duke 42-Prospect), My Life is a Musical (Bay Street), Sita/Sati(New Ohio/Terra Nova), Emma (Old Globe), As You Like It/Inherit the Wind/Richard III (Old Globe).

Daveline was a 2000 Donna Reed National Scholarship recipient in musical theatre.
Visit him at www.adamdaveline.com
Posted by JP at 12:13 PM No comments:

Santino Fontana has his hands full

Santino Fontana, a 2000 Donna Reed Festival acting scholarship finalist, currently has two shows airing on television. He is playing a sarcastic, slightly bitter bartender in Crazy Ex-Girlfriend, a quirky new CW comedy/musical featuring Fontana as Greg Serrano, a guy who gets dragged into the topsy-turvey world of young lawyer Rebecca Bunch (played by Rachel Bloom), who dropped everything to follow an ex-boyfriend from New York to West Covina, Calif.

He is also appearing with Jennifer Lopez in Shades of Blue, an NBC drama that follows a tight-knit crew of police officers who are effective at keeping the streets safe but also corrupt when it come to lining their pockets and protecting their own.

Fontana got his first taste of working for television while on Broadway in the stage version of Moss Hart's theater memoir, Act One. Lincoln Center filmed the performance for a PBS special that is set to air in November.

Fontana's film credits include Disney's 2013 hit musical film, “Frozen,” voicing Prince Hans, and the upcoming Tina Fey and Amy Poehler comedy, The Nest.
Posted by JP at 8:50 AM No comments:

An Evening With Will Rogers 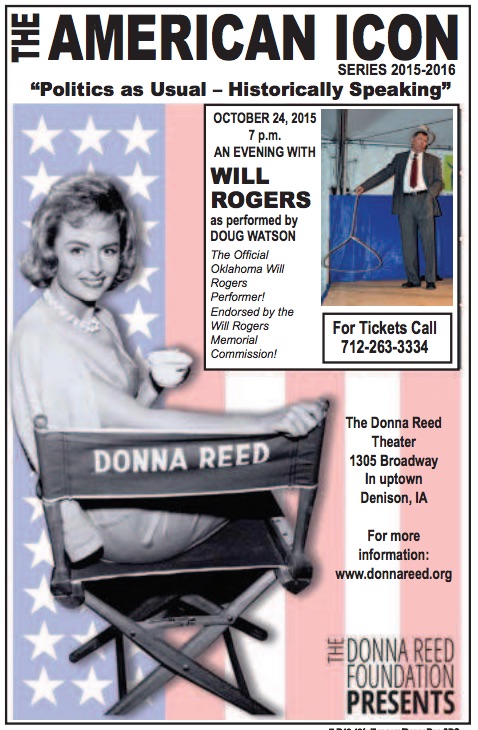 
Political campaigning is in full swing in Iowa and The Donna Reed Foundation for the Performing Arts is framing politics with a historical perspective during its fifth annual American Icon Series.

And who better to comment on politics than some of the foremost authorities of their day – Will Rogers, Mark Twain, and U. S. Presidents Washington, Jefferson, Theodore Roosevelt, and Lincoln - you know, the guys on Mount Rushmore!

Join us in a series of "Chautauqua-style" events from October, 2015 to March, 2016. The performances include live performances of scholarly "living history" actors, a panel, and screenings of American classics.

Performances begin at 7 p.m. at the Donna Reed Theater, 1305 Broadway, in downtown Denison, Iowa, home of The Donna Reed Foundation and Museum.

Tickets for each event are $20 and can be obtained by calling The Donna Reed Foundation at 712-263-3334 or by e-mail at info@donnareed.org.

Denison filmmaker's short films, others to be presented on Halloween


If scary movies are your thing, then you may want to make plans to attend “Mutant Martian Movie Madness” at the Donna Reed Theater on Halloween night.
The one-hour program will feature a selection of short independent films with a horror theme that have been screened at various festivals around the country. The films will range in length from seven to 29 minutes.
Two of the short films will be by Denison filmmaker Dan Mundt. Mundt describes his film, “Damaged,” as an idea for an episode of “The Twilight Zone.”
He wrote and directed the film in 2002, while an adjunct faculty member at the Greenlee School of Journalism and Communication at Iowa State University.
Mutant Martian Movie Madness will begin at 8 pm at the Donna Reed Theater in uptown Denison, Ia on Saturday, October 31.
The screening is free to the public. The program will be a fundraiser for the Donna Reed Foundation. Free-will donations will be accepted. (Gordon Wolf, Denison Review)
Read full article.
Posted by JP at 8:43 AM No comments: