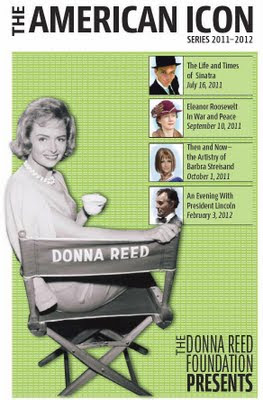 Imagine spending an evening with American Icons Frank Sinatra, Eleanor Roosevelt, Barbra Streisand, and Abraham Lincoln – and seeing a live version of It’s A Wonderful Life.
The Donna Reed Foundation for the Performing Arts in Denison, Iowa, is creating that kind of exciting opportunity. The newly created “American Icon Series” features five “Chautauqua-style” events and runs from July, 2011 to February, 2012. The performances include two concerts, two historical re-enactments, and a live radio play.
Each performance will begin at 7 p.m. at the Donna Reed Theatre, 1305 Broadway, in downtown Denison, Iowa, home of The Donna Reed Foundation and Museum.

The former actress "has the perfect blend of passion, personality and enthusiasm to go with a great understanding of Central Iowa's traffic flow," said KCCI general manager Paul Fredericksen in a statement announcing her hiring.

Schmillen, a Cherokee native, received a Donna Reed Foundation scholarship in 1998. She appeared in regional theater productions in Pennsylvania, Michigan, Florida and North Carolina, until five years ago when she joined Pappas Telecasting stations KMEG and KPTH in Sioux City, where she promoted local events.
Posted by JP at 2:58 PM No comments:

The Donna Reed Foundation for the Performing Arts has awarded four scholarships to graduating seniors who have participated in the performing arts during their high school careers.

To qualify for these scholarships, a student must be a graduate of a Crawford County high school and have acted in or have been a part of the tech crew for at least two drama productions during their high school career. Preference is given to students who plan to pursue a degree in the dramatic performing arts, however, this is not required in order to be considered for the scholarships.