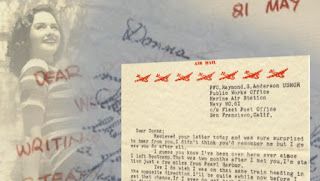 Martha Teichner reports on how Hollywood star Donna Reed contributed to the war effort during World War II, by sharing letters with American troops and entertaining service members at the fabled Hollywood Canteen, and how her messages from the homefront are being remembered today.

Preliminary research was done by producer Amy Wall and correspondent Teichner, who spent a day in Denison in August. They left with six hours of footage of interviews and seldom seen artifacts from the archives. They also interviewed Mary Owen, Donna Reed's daughter, at her home in New York City.

Watch the episode
Posted by JP at 8:57 PM No comments:


BURBANK, CALIF. -- Warner Bros. Home Entertainment’s series has announced that their series, Dorothy and The Wizard of Oz: We’re not in Kansas Anymore - Season One, Vol. One will be available in March on both DVD and Digital DVD.

The story centers on the adventures of Dorothy after she and her friends defeat the Wicked Witch of the West. Packed with memorable melodies, iconic Oz imagery (and of course her Ruby Slippers) that are sure to delight fans of the beloved children’s book series by L. Frank Baum and the classic film The Wizard of Oz, the series follows Dorothy after she’s named Princess of Emerald City by Queen Ozma. Dorothy embraces her royal duties with enthusiasm, bravery and farm-girl feistiness.