"Disney's The Lion King KIDS" Is Coming To Denison, IA

The award-winning musical that has captivated audiences around the world comes to life during June workshop.


This summer's Children's Musical Theater workshop production is the popular “Disney's Lion King KIDS.” It's a fun-filled week designed to teach the basics of musical theater to kids in grades K-8 who love singing, dancing and challenges. The workshop runs from June 13 – 17 and concludes with a performance for the public on Saturday, June 18. All events will take place at the high school, 819 North 16th St in Denison.

Since its meager beginning in 2004, this popular workshop has blossomed under the direction of Allison Rasmussen, a Manilla native and an instructional coach at Waverly-Shell Rock Community Schools. This is the tenth year she has volunteered to head this workshop production. She is assisted by a dedicated team, including former students who have aged out of the program. All give a week of their time to help stage the production.

Even local grandparents have discovered a benefit. By enrolling their grandchildren in the program, they get to spend quality time with them during the week of the workshop.

Workshop information and tuition rates can be found by downloading our registration form, by calling 712.263.3334 or by stopping at the Donna Reed Foundation office, 1305 Broadway, Denison, IA.
Posted by JP at 10:58 AM No comments: 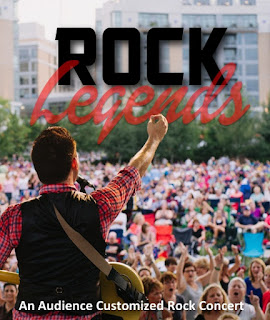 The Donna Reed Foundation and the Little Boyer Blues Society are bringing Billy McGuigan, a tribute band from Omaha, Nebraska, to the Donna Reed Theater in Denison, to perform the Rock Legends show at 7:30 p.m. on Saturday, April 30.

Rock Legends is a customized show – part rock concert and part rock tribute. Audience members are given the opportunity to pick the songs and music they want to hear through music personality tests prior to the show.

Money raised by the concert will go toward the maintenance and operation of the Donna Reed Theater building.

Jared Grimes teamed up with Wynton Marsalis and Lil Buck for a recent appearance on the late night show, performing “Petite Site (for Savion) Movement II.” It was part of their promotion of Marsalis' “Spaces” performance at Jazz at Lincoln Center in New York City, where he is artistic director.


Grimes, who was a 2001 Donna Reed Foundation scholarship recipient in dance, performed in last year's Radio City Music Hall production of "The New York Spring Spectacular," a show that featured the famed Rockettes.

Grimes was named outstanding male dancer in a Broadway show at the Fred and Adele Astaire Awards in New York in 2014. He won for his tap dancing in the Cotton Club-era musical revue, “After Midnight.” He then performed in the Tony Awards broadcast.