Free screenings of "It's a Wonderful Life" at the Donna Reed Theater, December 14 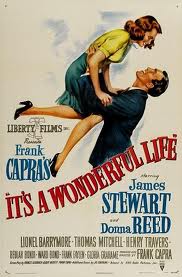 See It's a Wonderful Life as it was meant to be viewed – on the big screen.

On Sunday, December 14, the classic holiday movie, starring Denison native Donna Reed and Jimmy Stewart, will be screened twice – at 3 p.m. and 7 p.m. at the Donna Reed Theatre. Free admission.

It's a Wonderful Life received five Academy Award nominations, including one for Best Picture. The film won an Academy Award for Technical Achievement for the creation and use of a new method of simulating falling snow.

Bedford Falls display returns.
A miniature replica of Bedford Falls returns to the front window of the Donna Reed Heritage Museum for a winter showing. The HO scale replica was built by model building enthusiast from the Quad Cities area and, for several years, was displayed by the Mississippi Valley Regional Blood Center in Davenport, Ia. before being donated to the Donna Reed Foundation.

Exhibit on the making of It's a Wonderful Life continues inside.
Step inside the museum and view an expanded exhibit that features a variety of items from the Donna Reed Collection relating to the making of the movie. It includes a letter to pen pal Violet Lindsey mentioning the upcoming filming of the movie; daily call sheets detailing the daily shoot schedule; daily production reports tracking expenses and progress of the filming of a various scenes; Donna Reed's invitation to a screening of the movie from director Frank Capra; and the review of the movie which appeared in Variety. Of particular interest are photos of the new snow-making process developed especially for this film that replaced the practice of using painted cornflakes for falling snow.
Posted by JP at 8:29 PM No comments: