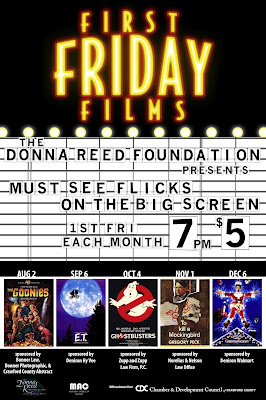 
It’s rare to find classic blockbuster films like The Goonies, E.T. or Ghostbusters showing on the big screen, but starting this month area residents can enjoy a unique night at the movies in Denison.

“First Friday Films” is a new film series playing must-see films on the first Friday of each month with 7:00 pm showtimes. The series will kick off with a screening of the Stephen Spielberg produced adventure film The Goonies (1985) this Friday, August 2nd.


After E.T. and Ghostbusters are shown in September and October, the series continues in November with the 1962 classic To Kill a Mockingbird, and the holiday comedy National Lampoon’s Christmas Vacation (1989) in December.
Posted by JP at 2:56 PM No comments:

It's our 8th Annual Wine & Beer Tasting Fundraiser, Friday, May 3

Proceeds will benefit programs of The Donna Reed Foundation


Don't miss this event at the historic Donna Reed Theatre in downtown Denison on the corner of Broadway and Main. It's a wonderful place to sample various wines and beers, have some great food caterd by Hy-Vee, enjoy desserts from Reiney's and spend an enjoyable evening with friends.

Entertainment will be provided by "Happy Tunes" and you will have the opportunity to join in the karaoke fun beginning at 6:00 p.m. A karaoke contest will be held from 7:30 - 8:30 p.m. and judges will award singers cash prizes at 9:00 p.m. - first place wins $50, with $20 going to second and third place finishers.

We conclude with a drawing for our door prize - a wine basket donated by ThermalFab. You must be present at 9:00 p.m.to win.

Tickets are $20 per person and available at The Donna Reed Foundation office or by calling 712-263-3334 or by e-mailing info@donnareed.org.

"Pirates! The Musical" Is Coming To Denison, IA 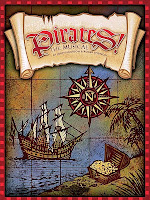 How do pirates get to be such heroic figures in our modern world? They're dishonest, selfish, smelly, naughty and well, a whole lot of fun. That's how. And, they make terrific subjects for a musical.

It's why our workshop directors picked Pirates! The Musical for our summer production. It's a fun-filled week designed to teach the basics of musical theatre to kids in grades K-8 who love singing, dancing and challenges. The workshop runs from June 17-21. 2013 and concludes with a performance for the public on Saturday, June 22.

We've added something new this year. Former students beyond grade 8 are invited to come back as volunteers to help stage the production. Arrr! You don't even have to be a former student. ANYONE of ANY AGE can offer their assistance. Just contact the Foundation office.

Additional workshop information and tuition rates can be found by downloading our registration form or by calling 712.263.3334 or by stopping at the Donna Reed Foundation office, 1305 Broadway, Denison, IA.
Posted by JP at 7:31 AM No comments:

Last program in the American Icon Series – Focus On Iowa

Wonder Women! The Untold Story of American Superheroines traces the fascinating evolution and legacy of Wonder Woman. From the birth of the comic book superheroine in the 1940s to the blockbusters of today, Wonder Women looks at how popular representations of powerful women often reflect society’s anxieties about women’s liberation. The film goes behind the scenes with TV stars Lynda Carter (Wonder Woman) and Lindsay Wagner (The Bionic Woman), comic writers and artists, and real-life superheroines such as Gloria Steinem, Kathleen Hanna, and others, who offer an enlightening and entertaining counterpoint to the male-dominated superhero genre. A film by Kristy Guevara-Flanagan and Kelcey Edwards,


The screening is free to the public with concessions available for purchase. After the film, a discussion will be held with the audience.

Watch the Trailer for Wonder Women!: http://youtu.be/bwuGGoNRtgE
Learn more about the film: www.itvs.org/films/wonder-women

Saycon Sengbloh, a 1996 Donna Reed Foundation national scholarship winner, landed the role of Martha Reeves in the stage production, “Motown the Musical.” Martha Reeves was the leader of Martha and the Vandellas who are famous for their hits “Heatwave” and “Dancing in the Streets.” Sengbloh, from College Park, Georgia, wrote on her website, saycontalks.com, that she had met Reeves years ago in Detroit and looks forward to meeting her again.


Earlier in her career Sengbloh became the first women of African descent to perform the role of Elphaba (the Wicked Witch of the West) as standby in “Wicked” the musical.
-Courtesy of Denison Bulletin

LOS ANGELES – On the eve of the Oscars, Ben Gunderson is feeling anything but miserable.

Gunderson, a 2005 graduate of Moorhead High School, is a cast member of the 25th anniversary touring production of “Les Miserables” and will be performing live with a special ensemble at tonight’s Academy Awards.

Gunderson and the “Les Miserables” group, which includes Oscar-nominated Hugh Jackman and Anne Hathaway, will take the stage at the end of a tribute to movie musicals.

Gunderson has been with the touring production of “Les Miserables” for 2½ years. He’s earned the title of dance captain, which means that he’s in charge of maintaining the show’s choreography.

Donna Reed Foundation looking for local talent for variety show to be performed March 23, 2013 as part of its American Icon Series – Focus On Iowa

Participants should bring sheet music or a CD with background music for the song they wish to audition. An accompanist will be provided. Rehearsals are planned for Thursday and Sunday evenings in March leading up to the show. High school and adult performers are urged to audition.

Those selected for An Iowa Songbook will be asked to perform songs that are connected to Iowa. That includes songs from Andy Williams, The Everly Brothers, Meredith Willson, and Roger Williams, among others. Some songs will be featured from Iowa films, either made in or about the state, or that starred Iowa artists. For example, It’s A Grand Night For Singing from the movie State Fair will be one of the songs presented. There will also be songs from Television. Remember Johnny Angel from the Donna Reed Show?

“Iowans have had a profound impact on American Pop Culture,” said show director, Tim Tracy, “and we’re going to try to feature as many of those great songs as possible in this show.”

Whitney M. Young, Jr. was one of the most celebrated — and controversial — leaders of the civil rights era. The Powerbroker: Whitney Young's Fight for Civil Rights follows his journey from segregated Kentucky to head of the National Urban League. Unique among black leaders, he took the fight directly to the powerful white elite, gaining allies in business and government, including three presidents. Young had the difficult tasks of calming the fears of white allies, relieving the doubts of fellow civil rights leaders, and responding to attacks from the militant Black Power movement.

The screening is free to the public with concessions available for purchase. After the film, a discussion will be held with the audience.

Watch the Trailer for The Powerbroker: http://youtu.be/34o7BoDU4ok
More about the movie: http://www.itvs.org/films/powerbroker

Audience Gets Into The Mood

Over 300 people flocked to The Donna Reed Theater in downtown Denison, Iowa to see Johnny Carson impersonator Jim Malmberg do a reenactment of “The Tonight Show.” They weren't disappointed as “Johnny” interacted with Kristie VerMulm, KTIV news anchor, and Kelly Sonnichsen, Crawford County naturalist and her critters. Don Luensman, Director of Marketing & Development at Crawford County Memorial Hospital, made the job of sidekick look easy. In fact, people wondered if he had previously worked with Malmberg. Tim Tracey, former managing director for The Donna Reed Foundation, provided an Iowa musical component with an Andy Williams selection.

Read Kristie VerMulm's recap of the evening HERE.
Posted by JP at 12:17 PM No comments:

Fourth program of “American Icon Series” is February 9 at 7:00 PM

The Donna Reed Foundation is offering Johnny Carson fans a chance to re-live a live version of the Carson show.

Celebrity impersonator, Jim Malmberg,  has been performing his tribute to “The King of Late Night” from coast-to-coast for over twenty years. Just as Johnny did back in the day, Jim does a monologue and interviews with guests, and re-creates some of Carson’s unforgettable characters, including the role of Carnac the Magnificent.

Malmberg’s resemblance to Johnny Carson, in both sight and sound, led him to give up an award winning career as a television reporter and news anchorman to pursue a career impersonating Johnny Carson.

The performance is part of The Donna Reed Foundation's “2012-13 American Icon Series – Focus On Iowa” and will take place at the Donna Reed Theater in downtown Denison.
Tickets are $15 for adults and $5 for youths under 18. Tickets can be obtained by calling the Donna Reed Theater Box Office at 712-263-3334, or by e-mail at info@donnareed.org. Purchasing tickets in advance is recommended for this event.

More information on the “American Icon Series” is available on The Donna Reed Foundation for the Performing Arts website, www.donnareed.org.

Film screenings free to the public on the last Sunday of each month.

The Donna Reed Foundation has been approved as a venue for the Community Cinema Program, a national documentary screening series sponsored by the Independent Television Service (ITVS). The program will run at the Donna Reed Theatre on the final Sunday of each month at 1PM. Film running times are around one hour and will include an audience discussion following the screening. All events are free to the public. Concession stand with soft drinks, popcorn, and candy will be available for purchase.


Our first screening will be the film Soul Food Junkies on Sunday, January 27th at 1PM. In Soul Food Junkies filmmaker Bryon Hurt sets out on a historical and culinary journey to learn more about the soul food tradition and its relevance to black cultural identity. Hurt’s exploration was inspired by his father’s lifelong love affair with the high-fat, calorie-rich traditional soul food diet and his unwillingness to give it up even in the face of a life-threatening health crisis. Hurt discovers that the relationship between African Americans and culinary dishes like ribs, grits, and fried chicken is culturally based, deep-rooted, complex, and often deadly.